SEM Analysis of Bolt Fracture of a Marine Reducer

Abstract: The SEM analysis of the fracture morphology of a marine reducer bolt is carried out. Combined with the working conditions and stress conditions of the bolt, the mechanism and process of the fatigue shear fracture formation are analyzed, and the cause of the bolt fracture is inferred. And put forward corresponding solutions to provide an important reference for the safe operation of the machine and the optimization of structural design.

Bolts used in ships are generally required to have high strength, high fatigue resistance, high reliability and corrosion resistance. While cleaning the circulating oil tank of a rear gearbox of a ship, several broken or detached bolts were found, which came from the large gear web. The author analyzes the stress of the bolt and tests the fracture morphology to infer the cause of the bolt breakage and proposes corresponding improvement measures.

Sampling from the broken bolts for chemical composition analysis, the results are shown in Table 1, in line with the technical requirements of 35 steel in GB/T699-1999 standard. The bolt material is a high-quality carbon structural steel with good comprehensive mechanical properties, high strength, and certain plasticity and toughness.

The bolt has an accuracy grade of 8.8 and a specification of M8Ã—25mm. After quenching and high temperature tempering, the microstructure is tempered sorbite, and its hardness is tested to obtain a hardness value of 26-31HRC, which satisfies 8.8. Technical requirements, it can be speculated that the bolt breakage is not caused by improper heat treatment. 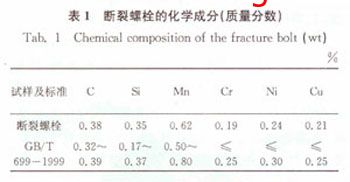 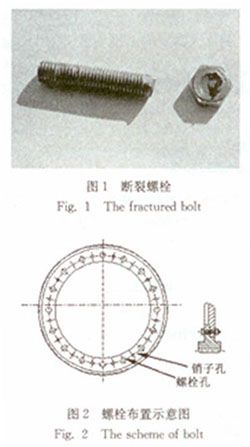 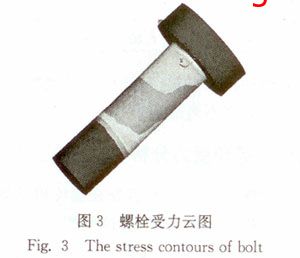 In order to further find the cause of the fracture, the oxide film on the fracture surface was ultrasonically cleaned, and then the fracture morphology of the bolt was observed under a scanning electron microscope.

It can be seen from the scanning electron micrograph of the fracture of Figs. 4 and 5 that the fracture form is a fatigue shear fracture [1], so it can be judged that the bolt is a fatigue fracture. Figure 4 shows the origin of the fatigue fracture, which is at the thread groove, which is generally the stress concentration area due to the machining process. The initial stage of the origin of the crack is also called phase I, and the crack propagates to the middle. Figure 5 is a typical characteristic of fatigue fracture. These fatigue lines are the result of repeated shearing action. 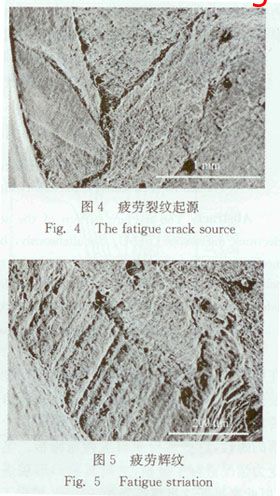 The fatigue fringe shown in Fig. 6 is the region of the high and low undulations left behind the crack front when the fatigue crack expands in the phase II. Each stripe is associated with crack growth in a load cycle. The density and width of the stripe are related to the load and stress levels being applied. The higher the frequency of the load, the lower the stress amplitude and the thinner the stripe. At the same time, as the crack propagates, the remaining load-bearing cross-section decreases, so the stress increases and eventually increases the crack propagation distance. The general direction of crack motion will be the macroscopic direction of crack propagation. It can be seen from Fig. 6 that the pitch of the stripes is about 10 Î¼m, and the distance at which each of the cyclic cracks advances coincides. The scallop pattern shown in Fig. 7 is a secondary crack.

As can be seen from Figure 6, there is a significant fatigue step, which is the final stage of fatigue crack propagation, also known as Phase III, which is the final overload fracture. In stage II, when the crack propagates to this point, the residual support material is insufficient to withstand the load of the next cycle (or several cycles) and is usually broken. That is, in the project where the crack is expanding, the effective bearing area is also decreasing, and the stress is becoming larger and larger. When the stress exceeds the breaking strength of the material, the last one-time instantaneous break occurs. The fatigue fracture morphology presents a coarse river pattern, which also indicates that the bolt is subjected to torsional shear stress. 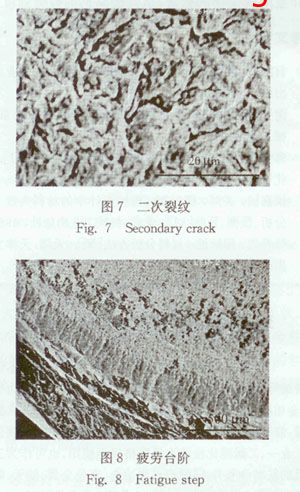 The shape and size of the dimple are directly related to the size, shape and distribution of the second phase particles, and there are larger particles in the larger cavity, so it can be inferred that there is inclusion in the material. The bolt material belongs to carbon structural steel. The carbon and other elements in the steel may form brittle metal compounds. These brittle compounds are inconsistent with the elastoplastic deformation at the basic interface, which may cause stress concentration and fatigue at the edge of brittle inclusions. Cracks, which reduce the fatigue strength of the steel. The larger the size of the brittle inclusions, the more the particles, the greater the hazard. Therefore, for such steels for bolts subjected to alternating loads, the number of non-metallic inclusions must be strictly controlled. 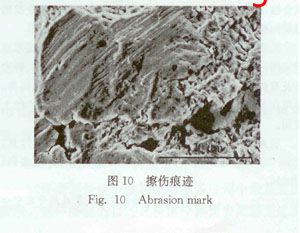 Through the SEM observation and analysis of the fracture morphology, combined with the bolt stress and working conditions, it can be found that the failure form of the bolt belongs to the fatigue shear fracture, the crack originates from the thread groove, and then develops with each cycle of the load. , eventually exceeding the critical value of the toughness of this material, and then expanding unsteadily leading to fracture.

(1) Due to the insufficient pre-tightening force of the bolt, the root of the bolt is continuously subjected to external impact, and the inclusions in the bolt material cause fatigue cracks, and finally breakage occurs.

(2) Appropriately increase the pre-tightening force of the bolt to avoid loosening of the bolt under vibration and shock conditions.

(3) Improve the surface roughness of the bolts, and appropriately increase the radius of the transition fillet to reduce the stress concentration, thereby slowing down the process of fatigue fracture.

(4) For steels for bolts subjected to alternating loads, the number of non-metallic inclusions must be strictly controlled to improve the fatigue strength of the steel.

Rich selection of textures and colors meet different decoration requirements, giving the city and the buildings a new look.
The PU foam is the most advanced and eco-friendly insulation material in the world. With the help of the back aluminum foil, the thermal preservation effect achieves the best.
The unique structure prevents the heat loss in winter. Meanwhile it reduces the heat of the summer sunshine.
Aceta paintcoat and flurocarbon paint of weather resistance performance are applied on surface of wall panel. It is reserved with superior self-cleaning, weather resistance, corrosion resistance and acid& alkali resistance performance.
Light weight with 3.7Kgs/m2 makes the installation easy.
The installation process is clean and tidy without any noise and dust, construction waste.
Different selections of accessories meet different effects.
High quality and stable performance: Manufactured in CNC automation production line, the product pass rate can reach 99.9% with stable chemical structure and physical structure. 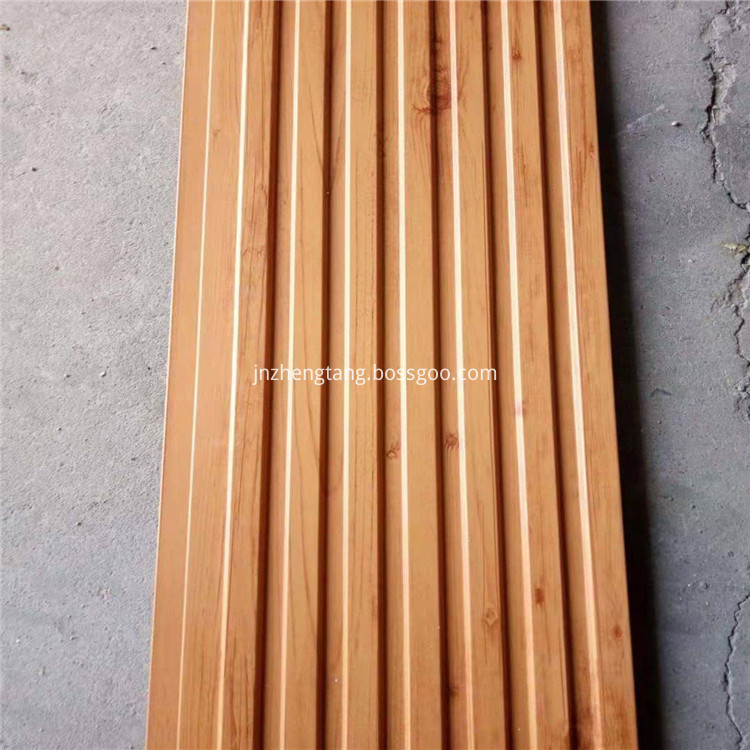